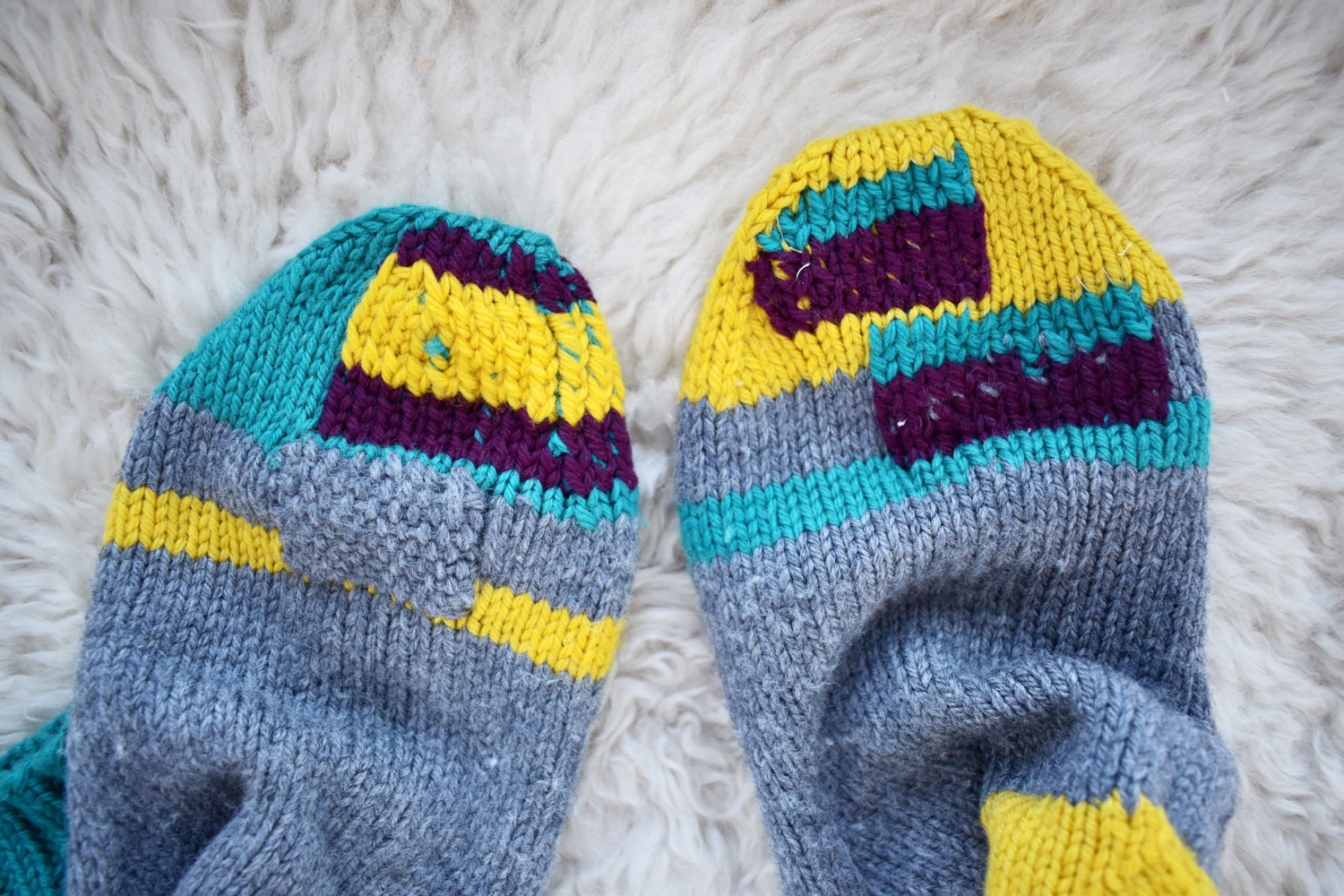 When I went to Quiltcon back in February, I brought along with me some visible mending I needed to do. I had a lot of people come up to me and ask me why I was mending socks?? I mean, isn’t it just easier to go buy more? Well, maybe. But the truth is that I knit these socks myself, years ago, and I love them. And since I rarely knit anymore because it causes me wrist pain, I know that I can’t simply throw them away and make more. So, why not mend?

I had two knitted items that needed mending: a pair of socks, and a pair of slippers. I was actually surprised that the slippers started to wear. They were knit with acrylic yarn so I assumed they would be hard wearing.

The socks were knit with 100% merino wool, which was my first mistake. The lack of any nylon in these means that they started to show wear and holes rather quickly. I attempted to mend them once before, years ago, and put the patch on the inside of the sock, which of course did nothing to stop the hole from getting bigger, and was rather uncomfortable to wear. You live and learn.

This time, I was determined to make them wearable again. I first took out my clumsy last attempt at mending. I assessed the wear spots and holes, deciding to proactively create patches for the wear spots that hadn’t worn through yet, instead of waiting until they did. I mostly used Swiss darning, or duplicate stitch for these. First I sewed in some quilting thread as a guide to where my stitches should go. This is helpful for holes so that your stitches have an anchor to adhere to. Then I used some contrasting yarn to create my stitches.

What I love about this method of darning, specially for socks, is that the darn really captures the wear spots and almost melds together into one, instead of simply sitting on top of the hole or wear spot. I have a feeling this will be a durable type of mend. I used some of the same yellow and teal yarns that I had originally knit the socks with, but for a more fun and contrasting look, I also used a purple that was the same yarn weight. The benefit of visible mending is that you’re supposed to see the mend, so there isn’t a worry about it “standing out” – that’s the point!

For one of the patches, I chose to use my Darn Easy vintage darning loom to create a patch over the hole instead (the grey patch in the left sock below). I love the uniformity of this mend, but I’m curious to see if it holds up as well as the Swiss Darning will.

For the slippers, I chose to do a swiss darning mend to both slippers. One had a hole and the other was just starting to wear, both where my big toe would be. This was a smaller mend and looks quite a bit neater than the job I did on the socks, and I’m happy to be able to put these back into rotation now.

I used white yarn that seemed fairly close to the original yarn. I made these a long time ago so I couldn’t be too picky about the yarn I used. In fact, I would have loved to use a completely different color to really make the visible mending stand out, but I don’t have much acrylic yarn left in my stash. So, white it was. 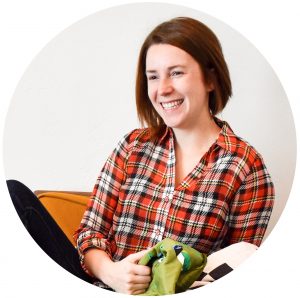